A woman finally met her long-lost dad, a man who didn’t even know she existed—thanks to an amateur sleuth she met on Facebook.Adrieanna Tyler thought she knew her father until the age of 13, when she overheard him referring to her as his stepdaughter.Since then, she wanted to know who her biological father was—but never could find out anything about him.

Now a 33-year-old mom married to a truck driver in Pittsburgh, Pennsylvania, she recalled, “I was desperate to find my real dad; it always mattered to me”.She began the search again this year by ordering a DNA test kit and asked for assistance from strangers running a Facebook group where people help strangers unite with long lost relatives.

“This wonderful lady called Suzanne on the group helped me build my family tree and after doing another DNA test we found my aunt.”

They tracked down her 47-year-old aunt, Kathie Johnson, and from there, found her biological dad—a police officer who lived 1,000 miles away in Florida.

“She said she’d put me in touch with my dad and I was so nervous! How do you just call someone and ask ‘are you my dad?’”

Adrieanna told SWNS news service that Joseph Frank ‘had no idea she had ever been born’ and was thrilled to learn he not only had another daughter, but two young grandchildren.

“When he found out about me, he was so excited, and it was such a relief. I felt so vulnerable before, in case he wanted nothing to do with me.”

After spending the next month texting and video calling daily getting to know each other, Joseph travelled from Florida to Pennsylvania so they could meet in person for the first time. 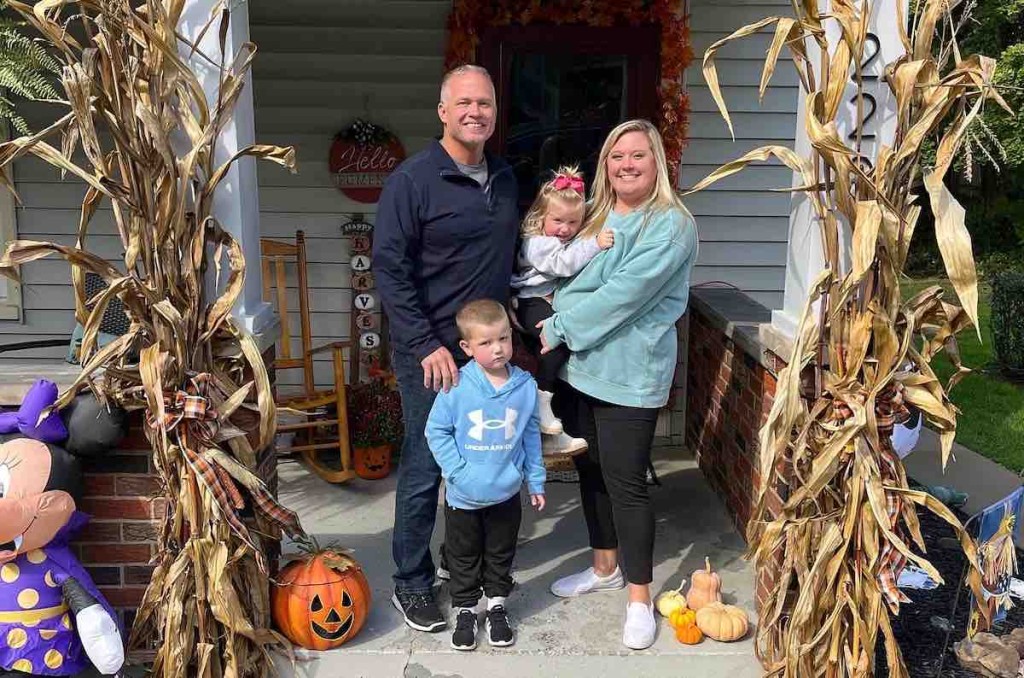 “We spent some time getting to know each other before finally meeting and it was just perfect. It felt like a dream.”

They met last week at a local festival near her home, and now they’re already planning a family holiday.

During the emotional meeting, they enjoyed pizza and she also discovered she has two half-sisters who are around her age.

“We bonded right away, and I finally feel I can start to heal now. Everything ended exactly how it was supposed to.”

“At the time when Adrieanna came into my life, I was going through a tough break-up and I really needed that.

“That part of my heart got filled again when I found out about my daughter.”

Joseph remembered having a “summer fling” with Adrieanna’s mother in the 80s while he was working on his uncle’s farm. They grew close but never spoke again, according to Joseph, who says he didn’t know she was ever expecting a baby.

“He said he always wanted children and he was excited to be a parent to me.

Joseph stayed with the family for three days—with Adrieanna describing it as “a surreal experience.”

“It was very emotional. I cried all weekend. It’s not until you’re stood next to someone that you realize how alike you look.

“To think I’ve been waiting my whole life for that moment.

“It was so worth the wait.”

Joseph added: “At first we were both a bit nervous but we settled so quickly and we realized we’re similar in a lot of ways.

“It was great to meet my grandchildren [Maximus, 4, and Preslee, 2]. We took it slow but by the time I left they were sad to see me go.

“It’s so exciting to start planning out our future lives together.”

Adrieanna said, “I just kept thinking that there is a man out there who deserves to know he has two grandchildren. I didn’t want to die knowing I hadn’t tried.”

“I feel like I can finally start to heal now I’m not wondering why he didn’t want me—when all this time it was because he didn’t even know I existed.” Teen with “nothing to lose” graduates top of his class